In 1944, the United States War Department was planning for the invasion of the Japanese mainland and expecting to encounter very strong fortifications. As such, the Army would need a heavy weapon to combat such structures. Specifications were drawn up and the Army figured on a weapon larger weapon than the 16-inch (410mm) guns as found on the Iowa-class battleships shooting a 2,700 lb (1,200kg) shell as these massive weapons had proven ineffective against Japanese bunkers at Iwo Jima. 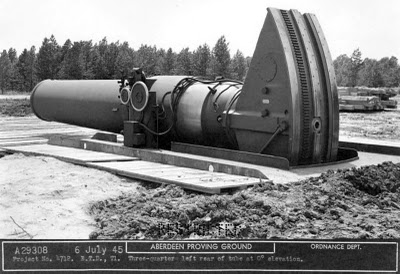 The new weapon was called "Little David", an American 36-inch (914 mm) caliber mortar, becoming the largest gun ever built (beating both the German "Dora" and "Karl" mega-guns). First used for test firing bombs during World War II, Little David was modified to serve as a siege mortar and it was planned to turn the instrument into an effective "bunker buster". When Japan surrendered, the mainland invasion became unnecessary and Little David was therefore never actually used in combat. 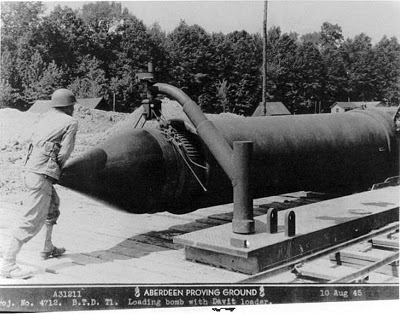 Its potential effectiveness was questionable, however, because of the gun's limited range and accuracy. This mobile mortar was capable of hurling a 3,650-pound projectile a distance of six miles via the giant 22-foot, muzzle-loading rifled mortar tube. Complete with its firing mechanism and other associated parts making up the tube assembly, Little David weighed in at 80,000 pounds. The mortar's metal base half-moon assembly underneath the tube (or barrel) was constructed in a squared huge box that weighed 93,000 pounds. The box would have to be buried underground by its own bulldozer for stability before firing. 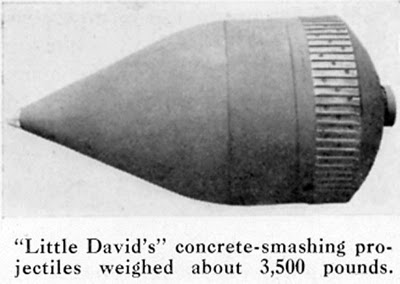 Little David would have been transported by two artillery M26A1 tank tractors consisting of a Truck, 12-ton, 6 x 6, Tractor, M26 (Pacific) and a Semi-trailer, 40-ton, M15 (Fruehauf) - the latter also called the 'Dragon Wagon'. The tractors were designated TR-1 by their manufacturers and were powered by the Hall-Scott Type 440 series 240bhp, 6-cylinder gasoline engine. Hall-Scott designed the 440 engine exclusively for the M26A1 and built around 2,100 examples of them. While traveling, the mortar's tube and base assemblies each made up separate tractor loads, while a third tractor would haul the 3,600lb projectiles. A complete Little David unit also included a bulldozer with crane and bucket shovel to dig the emplacement. The huge mortar could be assembled and ready to fire in 12 hours. Comparatively, the largest (820MM) known German artillery weapons were hauled on no fewer than 25 railway cars and required three weeks to be erected into firing position using some 200 crewmen. In that respect, this made Little David more mobile than a railway gun.

One of the last survivors of the Little David gun is on display at the proving grounds in Aberdeen, Maryland, USA.

Here is a video of the mortar.